North Side High School alumnus and artist Arnoldo Hurtado unveiled a mural spanning a 110-foot wall in the heart of the Northside community. The mural is designed to be a source of cultural pride and help revitalize this historic neighborhood. The unveiling took place Sunday, September 16 during “Fiesta Northside: A Mexican Independence Celebration.” The site of the mural is Franko’s Market, 2622 Azle Ave., Fort Worth 76106. 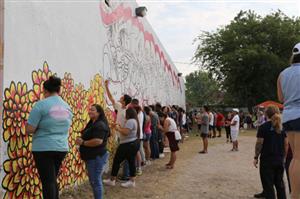 Mr. Hurtado said the mural comes four years after the creation of Comunidad 27, a crime prevention and community engagement group composed of neighbors from NW 27th Street. This community artwork is part of the group’s efforts to revitalize and beautify Northside neighborhoods. Mr. Hurtado said Franko’s Market was the perfect location for the community mural.

“I grew up on NW 27th Street behind Franko's Market. As a child I walked there to get groceries, chips, and with my mother to pay her utility bills.  I've known the owners of Franko's my whole life.”

Mr. Hurtado, who still lives in his childhood neighborhood, said the market is a cultural anchor in the Northside community that brings people together on a daily basis.

“Anybody who grew up in the Northside knows Franko's Market. Most people who pay their utilities in person go to Franko's Market to do that. The current owners are third generation owners of the store, which is one of the longest standing family-owned businesses in the area.” 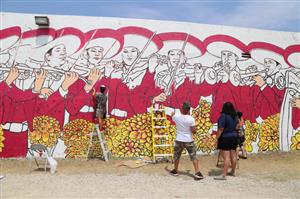 Mr. Hurtado said the idea of a community mural has been on his mind for some time, but he received new inspiration from recent trips to Germany and Mexico City. He decided to combine his passion for painting with an equal passion for community and social justice and create a colorful mural for his hometown. He announced the mural idea on social media, hosted community meetings to get input, and he met with local artists and the owners of Franko’s Market to decide on the subject of the mural.

“The Mariachi Espuelas de Plata was mentioned and we knew that was it,” Mr. Hurtado said. “Most everyone I know in the community went to North Side High School. Most people in the neighborhood are of Latinx decent (specifically Mexican) and the Mariachi is such a culturally vibrant symbol and art form. What better way to create pride than to highlight the awesome things our youth are doing?”

Mr. Hurtado organized a Convivio painting event in July, which drew more than 200 children and adults who were excited to paint the first layer of the mural. He has been fine tuning the mural to prepare for the unveiling with help from other local artists.

“The community’s reaction to the mural has been fantastic. People honk their horns and tell us we’re doing a great job when they pass by.”