It’s a gloomy Thursday morning in early May.

Despite the dreary day outdoors, the disposition inside a Western Hills Elementary School classroom is sunny.

Emil Nyberg of the Westside Kiwanis Club of Fort Worth sits at the front of a fifth-grade classroom with a large smile on his face. Mr. Nyberg and five other Kiwanis members have gathered in a fifth-grade classroom with colorful stickers, buttons, pencils and certificates to recognize students who’ve brought up a grade within the last six weeks or made the honor roll. 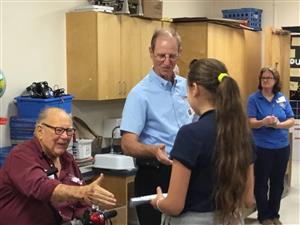 The recognition is part of a Kiwanis-sponsored program for students in the third-, fourth- and fifth-graders called BUG (Bringing Up Grades).

Over the course of two days, the Kiwanis members went from class to class celebrating students and distributing nearly 400 certificates to them for bringing up more than 550 grades during the fifth six weeks.  Applauses filled the air as one by one students walked to the front of classrooms where Kiwanis members presented them with stickers, a button, pencil and certificate. With a smile on their faces, the students held their certificates with pride.

On Tuesday, May 22, it was the Westside Kiwanis Club of Fort Worth’s turn to be celebrated for its efforts. The group was presented with The Pamela Day Awards for Family Engagement during a Fort Worth ISD Board of Education meeting. Named for a former FWISD educator and administrator, the award recognizes individuals and groups committed to helping FWISD students, families and the community.

Mr. Nyberg and other Kiwanis members were present to accept the award on the club’s behalf.

Chartered in 1947, the Westside Kiwanis Club of Fort Worth is extremely active in supporting the Western Hills pyramid and surrounding areas.

Most recently, in addition to recognizing students for academic achievement, the club has purchased school uniforms for students, sponsored Key Club chapters at Western Hills High School and Benbrook Middle High School and recognized students at the two campuses with $1,000 for exhibiting outstanding community service and leadership.  The club organized a Jo Kelly Teacher Appreciation event where it distributed gift bags including a $50 gift card for faculty and staff members.

At Western Hills Elementary, the generosity doesn’t stop at celebrating academic achievements. Westside Kiwanis Club of Fort Worth purchased a washer and dryer for the campus to assist students in need, and it created a free on-campus clothes closet for children and adults.

“We are so grateful for their kindness and generosity,” said Valerie Barron, Western Hills Elementary assistant principal. “The Kiwanis also sponsor the BUGs program, and it is amazing to see students’ faces light up when they receive a certificate for bringing up their grades.”

Mr. Nyberg said that a series of published stories about the Las Vegas Trail community is what moved the group to become involved with the area schools.

During visits to distribute BUG certificates, the Kiwanis members encourage students to strive for a 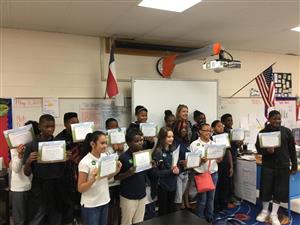 college education and become whatever they want to be. Students are encouraged to keep up their grades so that they can one day obtain college scholarships.

Students recognized through BUGs will be celebrated with an ice cream social, and their names are being placed in a drawing for a bicycle given by Westside Kiwanis Club of Fort Worth at the end of the school year.

In August, the club is scheduling fund-raising events to support FWISD students.