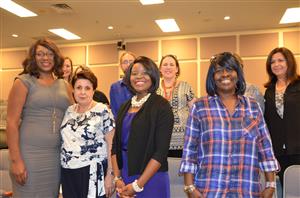 On April 19, 2018, a 13-year-old INA student was viciously attacked on the way to the bus stop. Ms. Dover came to the aid of the student, who was able to escape the attacker and get to the bus. Board President Tobi Jackson calls Ms. Dover, who immediately called 911 and dispatch for help, “some kind of hero.”

The student, who sustained severe injuries, remains in a Fort Worth hospital.

An arrest has been made in the case.

In the months since the attack, Ms. Dover, Ms. Dibi, Ms. Al-Atrash, Ms. Ross and many others have assisted the student and family. President Jackson at the August 21 meeting shared that a hospital chaplain stated the women have “worked far past school hours and even helped on weekends,” supporting the student and family.

“These employees brought food to the family, helped to transport the other family children to and from [the] hospital each day. They even helped pay the family’s cell phone bill,” she said at the meeting. “What you all each did is beyond amazing.

“You guys are just heroes.” 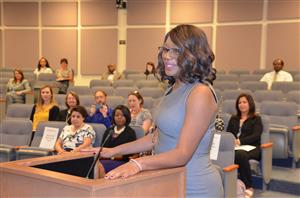 INA Principal Ross told board trustees that the support of the family was nothing she did alone.

“At INA, we are a team, we work together, we support each other, and we do everything for all children,” she said. “We’re here for the kids, all of them, until they graduate, and they work in Fort Worth and give back to the city. That’s why we do what we do, not for recognition, but for our babies and the future of Fort Worth ISD.”

Immediately following the August 21 recognition, trustees briefly recessed their meeting to capture a photo with the evening’s honorees.