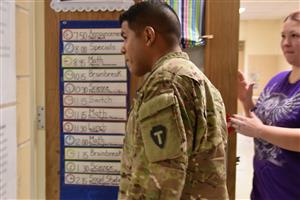 One by one, Sgt. John Torres walked to the classrooms of his first-, second- and fifth-grade children at Waverly Park Elementary to surprise them all.

Each child reacted differently. While Sgt. Torres’ second-grader wanted to get him up to speed on what she and her peers were doing in class, his fifth-grader jumped up to greet dad with a long embrace and a few tears. His first-grader excitedly scurried to him for a big, long hug followed by a few sweet pecks on the cheek.

The Torres family intended to surprise their oldest child, a seventh-grader at Leonard Middle School, later in the day.

Over the years, Sgt. Torres has been deployed five times including tours in Iraq, Afghanistan and Korea.  Most recently he was stationed in Cuba where he worked in a clinic. 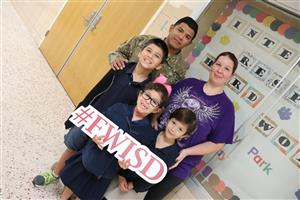 “This was the first time I ever came to surprise them like this, so it was pretty nice. It was pretty good,” he said.  “[It was] exciting to see their faces. It almost broke me, but I held strong.”

The trio of children said they were all excited to have their father home, and he said he couldn’t wait to eat “something delicious” with them and just enjoy playing.

Rebecca Torres said she nearly cried watching her children reunite with their father.

“For them to actually see him, it was nice.”Roberto Baeta, principal at Waverly Park Elementary, said that Mrs. Torres contacted him about two weeks ago with the idea to surprise her children upon her husband’s return home from deployment. He said that he was happy to oblige.

“We got so excited,” Mr. Baeta said. “It’s not only their encounter that’s beautiful.

“We appreciate everything that our military does for us, but also it is about trust.  While he was 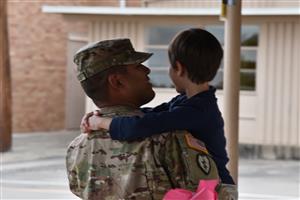 deployed, and he was taking care of every single one of us, he was trusting us and he knew that we were taking care of his children not only at the emotional level, also the academic level, so that means a lot to us.”

Take a look at footage from the surprise return on the District’s Facebook page and photos from the reunion here.