Fort Worth ISD sixth-graders  are attending exclusive piano performances associated with themes of the book “The Children of Willesden Lane” this week.

This year, FWISD partnered with the Dallas Holocaust Museum/Center for Education and Tolerance and Hold On To Your Music to launch a city-wide Holocaust education program, engaging 200 educators and 6,350- sixth graders in an innovative, interactive, curriculum incorporating literature, social studies, the performing and visual arts. During the second six weeks of school, sixth-graders read the book “The Children of Willesden Lane,” a memoir by Mona Golabek about her mother, Lisa Jura, a Jewish girl from Austria that sought refuge in England as part of Kindertransport, a rescue mission to save children threatened by Nazi persecution during World War II. 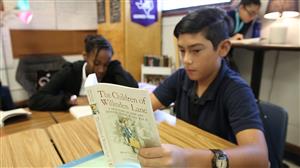 The program culminates November 26 and 27, with sixth-graders attending a musical performance of the book by its author, Ms. Golabek, a renowned and classical concert pianist. Performances will take place at Will Rogers Memorial Center an the I.M. Terrell Academy for STEM and VPA.

“The true story of Mona Golabek’s mother, Lisa Jura, and her escape on the Kindertransport is one that must be told over and over and over,” said Fort Worth ISD Superintendent Kent Scribner. “We are giving our sixth-grade students a historical reference as well as a deeply personal understanding of the injustice and intolerance of the Holocaust and the tragedy of World War II. We are confident that the City-Wide Read curriculum will touch hearts and inspire compassion in all students.”

Upon completing the book, sixth-graders were encouraged to write Ms. Golabek personal letters about their own connections to the book and how it changed their view of themselves and or the world.  The top three letters from each middle school were entered into the District’s Letters About Literature Contest.

Fifteen students from 12 FWISD schools were selected contest grand champions and are invited to meet Ms. Golabek for an exclusive meet and greet and book signing folowing the final perfromance.

The City-Wide Read and Performance program was brought to Fort Worth after a successful 2016 run in Dallas.

“Willesden Lane is a stunning testament to the power of music to lift the human spirit and to grant the soul endurance, patience and peace,” said Dallas Holocaust Museum President and CEO Mary Pat Higgins. “It is especially timely in this age of growing division and intolerance that we find ways to encourage positive classroom discussion on anti-discrimination and tolerance. To have Mona Golabek bring her talents to Fort Worth to perform this inspiring story for the next generation will bring the words on the page to life for them and impart many important lessons about choosing to be an upstander who stands for what is right no matter the circumstances.”