Lee Williams, a retired track and field coach from Fort Worth ISD’s O.D. Wyatt High School, is part of the 10th Texas Track and Field Hall of Fame class. 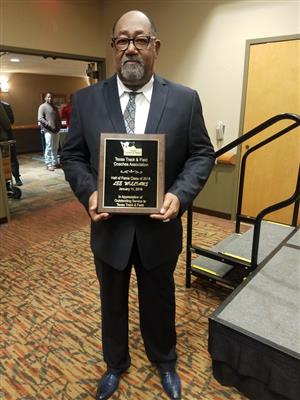 Mr. Williams, who worked for FWISD more than 40 years, was among eight inductees enshrined at a ceremony Friday, January 11, 2019, at Great Wolf Lodge in Grapevine.

The legendary coach joined the Fort Worth ISD in 1976, working his first few years at McLean Middle School, followed by a year stint at North Side High School. In 1979, he joined the O.D. Wyatt staff.

Throughout his career, Mr. Williams coached 52 All-American athletes, runners to 15 district championships and two state championships in 1998 and 2002.

In 1998, he coached four sprinters who set national records in the 4x100 and 4x200 relays, one of which holds the record today and the other which was just broken in 2018.

Mr. Williams is a recipient of the Track and Field Coach of the Year for the state of Texas presented by the National Federation of Coaches among several other accolades.

Read more about Mr. Williams in this recent Fort Worth Star-Telegram article.