Diamond Hill-Jarvis, Dunbar, Eastern Hills, Paschal, Southwest and O.D. Wyatt high schools were expected to participate in the parade which began at Ninth and Commerce streets and ended with a rally at Sundance Square Plaza. 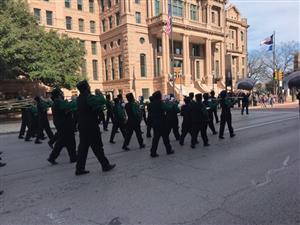 The parade was one of two parades scheduled in downtown Fort Worth over the weekend. The Fort Worth Stock Show’s All Western Parade, slated for Saturday, January 19, was canceled because of “adverse weather conditions,” according to Fort Worth city officials.

In addition to the MLK Parade, the city hosted several other events in observance of the federal holiday.

Preceeding the parade in General Worth Square at the corner of Main and Ninth streets, the city unveiled the Martin Luther King Jr. Heritage Trails marker, commemorating Dr. King’s first and only visit to Fort Worth in 1959.

The City of Fort Worth MLK/Juneteenth Employee Committee and Diversity and Inclusion Committee was also slated to host the 34th annual Martin Luther King Jr. Holiday Celebration. The theme, One Night With A King, honored Dr. King’s trip to Fort Worth. During that visit, Dr. King was hosted by Veda Phillips Felder, an educator, author, civil rights leader and 1928 alumna of I.M. Terrell High School. A panel discussion on Ms. Felder’s work was also planned for the event, according to the city.