The Fort Worth ISD is observing African American History Month with multiple celebrations this February.

During the month, the District will celebrate, remember and reflect on the contribution of distinguished alumni and former teachers as several schools are hosting Black History programs and productions.

The District kicked off the month with the Eastern Hills High School Choirs, under the direction of Brittany Haywood, performing at the February 12 Board of Education meeting. At its February 26 meeting, trustees are slated to recognize Maurice Spruell, a member of Dunbar High School’s first graduating class (1957) and the first male recipient of a citizenship award. 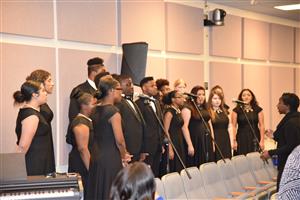 Fort Worth ISD’s K-12 African and African-American History and Culture curriculum, as well as alumni named to the Wall of Fame and trailblazers with FWISD tiesare being featured in the weekly Inside FWISD newsletters and on social media platforms.

Multiple schools are putting up displays highlighting historical figures and facts, while others are honoring African-American staff members in their campus newsletters.

Each February, the United States celebrates the achievements and contributions of African-Americans.  The annual observance, officially known as African American History month, or Black History Month, was originally established in 1926 by author and historian, Carter G. Woodson. For 50 years, the acknowledgment of black history was a weeklong observance. In 1976, the United States bicentennial, the week was expanded to a month-long celebration.