Students at Fort Worth ISD’s North Side High School recently participated in a simulation exercise exposing them to what people living with Alzheimer’s disease experience. 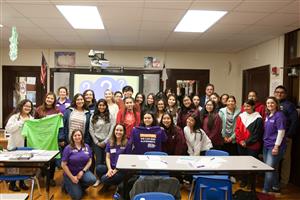 Representatives from the Alzheimer’s Association shared information with students about the disease and dementia on Friday, October 25, 2019. The association is partnering with health science students at North Side to launch an Alzheimer’s Ambassador program that increases Alzheimer’s and dementia awareness. Students will be trained as community ambassadors and encouraged to share their knowledge with elementary and middle school students.

Alzheimer’s disease is a form of dementia that affects a person’s memory, thinking and behavior. It’s the sixth leading cause of death in the United States and 5.8 million Americans are living with the disease, according to the association’s website. Every 65 seconds, someone in the United States develops Alzheimer’s disease, according to the association.   Alzheimer’s is the most common cause of dementia, which is the overall term for cognitive impairment conditions.

“Alzheimer’s is a health crisis that is facing both the United States and the world,” said Audrey Kwik, Alzheimer’s Association director of program services for the association’s North Central Texas chapter. “We believe that by educating our students, we really do have the power to change the progression of this disease.” 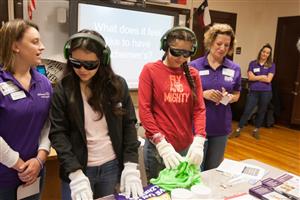 Students received information about the warning signs, risk factors and how they can raise awareness about the disease.