FWISD Alumnus Fiske Hanley to be Laid to Rest Saturday 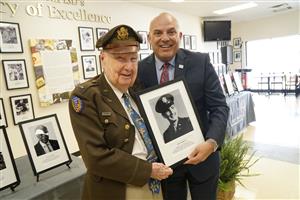 Patriot Guard Riders will prepare a flag line to greet Mr. Hanley’s loved ones at they arrive Saturday for his services at Greenwood Funeral Home’s Independence Chapel on White Settlement Road in Fort Worth. Visitation is slated for 9 a.m. followed by the funeral service at 10 a.m.

He was a member of Paschal High School’s 1938 graduating class.

After graduating from Paschal, Mr. Hanley studied aviation engineering at North Texas Agricultural College and later at Texas Technical College (now Texas Tech University), where he graduated in 1943. A day after graduating college, he boarded a train to Florida for cadet training after being drafted by the U.S. Army. He became a second lieutenant and B-29 Flight Engineer with the 504th Bombardment Group, which was shot down over Japan in March 1945. He was held as a prisoner of war and tortured until his rescue in August 1945.

Mr. Hanley went on to a successful career as an aeronautical engineer at General Dynamics, now Lockheed Martin Corp. He is the author of “Accused American War Criminal: An American Kempei Tai Survivor,” which he began writing as a way to deal with the trauma of his being held captive.

Until recently, Mr. Hanley kept an active schedule, speaking to groups about his wartime experience.

Learn more about Mr. Hanley in a Fort Worth Star-Telegram article published earlier this week.