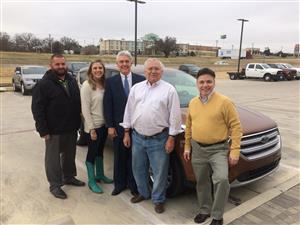 FORT WORTH, TEXAS – Following the Fort Worth School District’s push to increase attendance percentages, Trimble Tech Principal Omar Ramos remembered the success he had boosting his school’s attendance in 2004 with a car give-away incentive.  Hoping that Trimble Tech could once again boost their attendance rate for the end of the 2017-2018 school year, Principal Ramos collaborated with Mr. Roger Williams, owner of Roger Williams Chrysler Dodge Jeep RAM, and with Mr. John Avila, Chairman of the Board of Byrne Construction Services.  With their financial help and some attendance incentive money from the District, a 2016 white Jeep Compass was purchased.

At noon on Thursday, May 31, 2018, Principal Omar Ramos and Assistant Principal over Attendance Doug Dehn conducted the final drawing to award the car.  Ten student names were drawn, each student received a key, but only one key would start the car!   Senior Ellyson Ruiz-Mata held the winning key, and such excitement broke loose when his key started the Jeep Compass!

The 2017-2018 incentive program, which only ran during the 5th and 6th six weeks, helped solidify our 95.25% overall attendance rate—one of the highest at the secondary level.  This helped catapult Principal Ramos to continue boosting attendance with weekly prizes, awarded by random drawings of the name of a student who had no absences or tardies during the week.  Various prizes have been 24” LED televisions, Fire HD9 tablets with Alexis, and Samsung or Sony Blue Ray DVD players.  Pictures of weekly winners as well as class attendance percentages are posted on our Facebook page and announced over our PA system.

This year, the overall attendance rate for the fall 2018 semester was 97.14%, the highest of all comprehensive high schools.  This yearlong attendance push will end in May of 2019 with another vehicle being awarded to one lucky student!

Principal Omar Ramos is once again partnering with Mr. Roger Williams of Roger Williams Chrysler Dodge Jeep RAM and with Mr. John Avila of Byrne Construction Services.  Soon Green B. Trimble Technical High School will take delivery of a beautiful 2017 Canyon Ridge (auburn color) Ford Escape, to be awarded in May, 2019.  As we get closer to the May drawing, students will be looking forward to finding out if they might hold the winning key!! 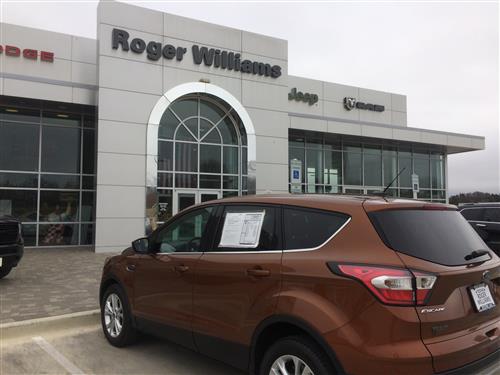