Our Trimble Tech annual 9/11 Remembrance Ceremony took place on the front steps of our historic building.  We were very fortunate to have as our guest speaker Major Robert Williams, United States Air Force, Retired. Major Williams graduated from Hastings College in Nebraska; he joined the United States Air Force and received his commission in June 1969. He retired from the Air Force after a 20-year career as an Aircraft Maintenance Officer serving mostly with the Strategic Air Command on KC-135 and B-52 aircraft.

Following retirement, he moved to Texas and embarked on a second career with Flight Safety International as an Instructional Developer and Project Specialist. He retired from them in 2014 after 24 years.

In 2005, Major Williams joined the Fort Worth Chapter of the Military Order of the World Wars, the second oldest Veterans Support Organization in America. Since becoming a Companion of the Order, he has served in most of the leadership positions in the Order at all levels. Last month, at the Order’s Centennial National Convention, he was re-elected to a second term as one of four Vice Commander’s-in-Chief or National Vice Presidents. In this position, he serves as a member of the National Executive Committee or Board of Directors. In addition, he has oversight responsibility for three National Committees and Two Regions, which encompass 21 Chapters in seven states.

In his speech, Major Williams compared "serving" and being "of service." He closed by asking all of us to be "of service" to each other--be kind, prevent bullying, help one another.

The Bulldog Band played the Star-Spangled Banner while the flag was raised, and then a lone trumpeter sounded taps as the flag was lowered to half staff. ROTC Battalion Commander Denise Murillo and Mr. Ramos placed a commemorative wreath by the flagpole, followed by a moment of silence for all those who perished during and after the deadly attacks on 9/11/01. 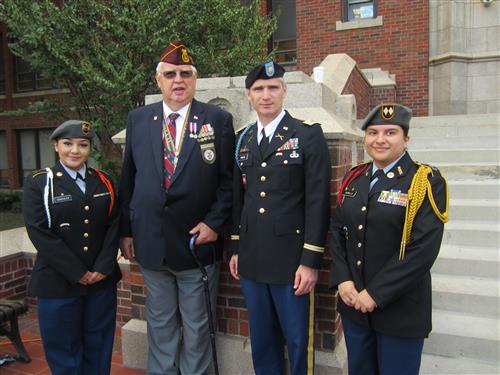