Marvin G. Richardson, acting director for the U.S. Bureau of Alcohol, Tobacco, Firearms and Explosives, recently participated in festivities kicking off the 2021-2022 year for Fort Worth ISD’s My Brother’s Keeper/ My Sister’s Keeper (MBK and MSK) chapters. 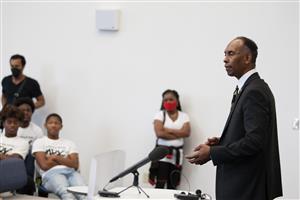 Mr. Richardson spoke with MBK and MSK student members at Western Hills and Eastern Hills high schools on Friday, September 24, about his law enforcement career and solutions for combating gun violence in the community. He also encouraged students to never give up, be intentional about their paths and approach obstacles as challenges along their journey to success.

“Always think you can, because if you think you can you will, and no one can stop you from thinking that you can except you,” Mr. Richardson told students.

“Violence is learned, and it can become unlearned,” said Rickie Clark, FWISD MBK executive director. “We want to be a community within the community that transforms the community.”

Mr. Richardson, a native of Fort Worth’s Como neighborhood, returned home recently for a series of events hosted in his honor. Throughout his busy day, he made time for FWISD students.

His law enforcement career spans more than 30 years, starting as an officer at the University of North Texas before leaving UNT in 1989 to join the ATF as a special agent with the Dallas division. He’s received multiple accolades including the U.S. Treasury Department’s Hostile Action Medal for his service during the 1993 Branch Davidian conflict in Waco. Mr. Richardson was appointed the ATF’s deputy director in June 2021, and currently serves as the bureau’s highest ranking official, acting director.

FWISD’s MBK program partnered with the UNT Eta Epsilon Chapter of Alpha Phi Alpha Fraternity, Inc. to host a series of events last week including a breakfast ceremony honoring Mr. Richardson at Como First Missionary Baptist Church in Fort Worth, presentations to MBK programs at Western Hills and Eastern Hills high schools, a private law enforcement lunchtime roundtable discussion, a reception in Mr. Richardson’s honor at his alma mater, UNT, and several other activities.  The events put a spotlight on the work of MBK in Fort Worth schools and celebrated the achievements and leadership of Mr. Richardson, a member of Alpha Phi Alpha.

DeWayne Charleston, chair for the events, said it was important to include FWISD students in festivities recognizing Mr. Richardson. Many are unaware that the highest-ranking ATF official is from Fort Worth and that he’s an African American man, he said.

“We need to show these young [students] … so that their first encounter with law enforcement is not a negative one but a positive one that they can see themselves in,” Mr. Charleston said. 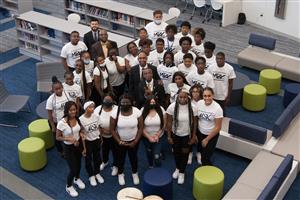 View video from the recent visit here and photos here.

My Brother’s Keeper is a national organization launched in 2014 by former President Barack Obama. The initiative empowers boys and young men of color by offering them access to resources and opportunities to reach their fullest potential.

FWISD currently has 17 MBK chapters and five MSK chapters at secondary schools across the District.

To learn more about the MBK and MSK programs, please contact FWISD’s Division of Equity and Excellence at 817-814-2337 or click here.