Nearly 70 Fort Worth ISD students have an opportunity to attend former first lady Michelle Obama’s book tour, “Becoming: An Intimate Conversation with Michelle Obama,” when it rolls into Dallas, December 17. 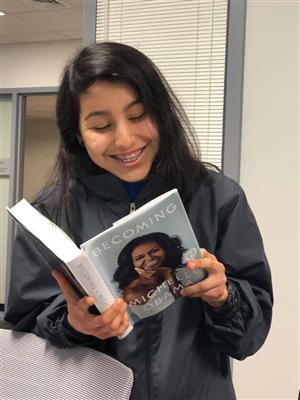 Students in the eighth through 12th-grades at select FWISD campuses may apply to attend the event, December 3-10. Students must complete an application that includes details about their leadership attributes and extracurricular activities participation. In 500 words or less, students must also write an essay indicating how Mrs. Obama has modeled leadership and scholarship in her lifetime, the ways they themselves have exemplified leadership at their school and in the community, and the impact attending this event will have on their life.

Other criteria considered include the student’s attendance record, leadership attributes, whether they are first-generation college bound or economically disadvantaged.  Applications are due to campus principals no later than 4 p.m. December 10.

The opportunity to attend the book tour event is made possible by the Reach Higher Initiative, which Mrs. Obama launched in 2014 that encourages students, especially first-generation college and low-income students, to pursue a postsecondary education.

Students selected to attend the book tour event will receive notification the week of December 10.

Released November 13, Mrs. Obama’s memoir, “Becoming” in just a little over two weeks became the top-selling book of 2018, according to publisher, Penguin Random House. The book remains the No. 1 book on The New York Times Best Sellers list in print, electronic book and hardcover nonfiction.

On December 17, she arrives at Dallas’ American Airlines Center for a conversation moderated by Valerie Jarrett, a businesswoman and former senior adviser to President Barack Obama.