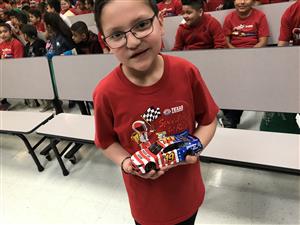 The Design-a-Diecast contest encourages students from elementary schools participating in Texas Motor Speedway’s Speeding to Read program to submit designs of their fantasy stock car, similar to cars in the Monster Energy NASCAR Cup Series™, and write an essay explaining the inspiration behind their design. Winners are selected in two divisions – kindergarten to second-grade and third to sixth-grade. This year, more than 8,000 design schemes were submitted.

“Speeding to Read is one of those programs that our team at Lionel Racing looks forward to each year,” said Howard Hitchcock, President of Lionel. “We are always incredibly impressed with the students’ die-cast designs and we can’t wait to see what paint schemes the students create and the stories behind them.”

This is the second straight year a Diamond Hill student has been named the overall Design-a-Diecast contest winner. In 2018, Alondra Villa, then a fifth-grader, was named champion.

Every student and faculty member at Diamond Hill Elementary School will receive a die-cast car with Ivan’s design at a later date.