Marc Istook, a graduate of Fort Worth ISD’s Southwest High School, is the newest anchor of the WFAA-TV morning show, News 8 Daybreak. 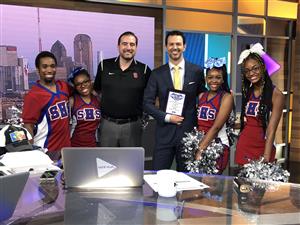 Mr. Istook was officially introduced to viewers on air and welcomed home to Texas, Monday, July 15. The morning broadcast was filled with multiple surprises including a performance from Southwest band and cheer members and Mr. Istook being presented on air with a Distinguished Alumni plaque from Principal John Engle.

A video, shown during the broadcast, gave viewers a glimpse of the Fort Worth native’s deep Texas roots and his time at Southwest High. After about 20 years away, Mr. Istook returned to Southwest High to film the video, July 10.

“Walking these hallways just takes me back. Sometimes you forget how influential a place is until you’re back in that space,” he said in the video. “It’s emotional to be back in here and kind of relive those moments.”

Darcy McCready, the TV instructor for Southwest High’s Advanced Media Program, spoke with Mr. Istook for the video segment and had an opportunity to spotlight the school’s nationally-acclaimed program. Having Mr. Istook anchoring a local morning news show is a great opportunity for Southwest students to see a former student on air in one of the nation’s largest TV markets, she said. Mr. Istook’s return to Texas is a great celebration for not only Southwest High but Fort Worth, Mrs. McCready said.

Mr. Istook joins nearly a half dozen other FWISD alumni who are on-air broadcasters with Dallas-Fort Worth news stations.