As the nation commemorates the 50th anniversary of the first moon landing, Fort Worth ISD is reflecting on and celebrating two alumni who are heroes of America’s space program—Gerald Griffin and Capt. Alan Bean. 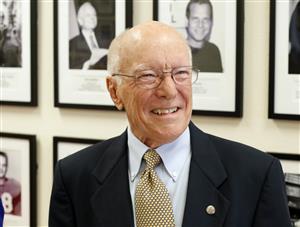 former director of the Johnson Space Center, former deputy director of the Kennedy Space Center; a flight director for all Apollo manned missions and recipient of the Presidential Medal of Freedom. In 1970, Mr. Griffin was assigned to lead the Apollo 13 lunar landing mission. Upon complications 56 hours into the flight, Mr. Griffin and his mission control team scrapped the mission and did what they could to ensure Apollo 13 and its three astronauts returned home safely. He served as a technical advisor on the motion picture Apollo 13.

On June 17, 2019, the District inducted Mr. Griffin to its prestigious Wall of Fame which celebrates the successes of many FWISD alumni. View the video from the recent Wall of Fame ceremony here.

Mr. Griffin worked alongside another FWISD graduate and Wall of Fame honoree at NASA—Capt. Bean.

A 1950 graduate of R.L. Paschal High School, Capt. Bean was the fourth man to walk on the moon. 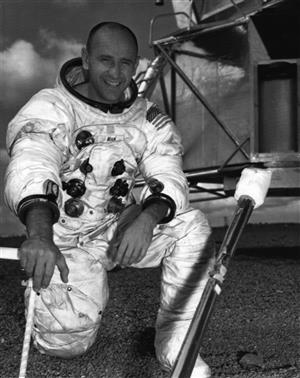 He attended Navy Test Pilot School and was among 14 trainees from the U.S. Navy selected in 1963 by NASA to become one of its third group of astronauts.

The Apollo and Skylab astronaut traveled to space twice. In November 1969, he was a lunar module pilot on Apollo 12, the country’s second moon landing mission. In July 1973, he was a commander aboard the U.S. second crew flight traveling to Skylab, the first U.S. space station.

Capt. Bean retired from the Navy in 1975, and from NASA six years later. Following his career at NASA, he became an accomplished artist who for nearly four decades painted Apollo-themed pieces. According to NASA, the canvases were “textured with lunar boot prints,” and the acrylics were “embedded with small pieces of his moon dust-stained mission patches.”

Artifacts from Capt. Bean’s space missions and his paintings are currently part of the Launchpad: Apollo 11 Promises Kept exhibit on display at the Fort Worth Museum of Science and History. The 10,000-square foot exhibit, on display in the museum’s Gary Havener gallery, commemorates the 50th anniversary of the Apollo 11 mission.

On July 16, 1969, astronauts Neil Armstrong, Michael Collins and Edwin “Buzz” Aldrin embarked on a lunar mission that would become historic. On July 20, 1969, the American astronauts became the first individuals to walk on the moon.

Read more about the Apollo 11 mission and commemoration of the event on the NASA website.