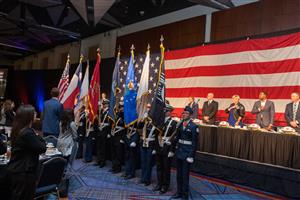 Festivities included a January 3 luncheon at the Fort Worth Convention Center and the annual bowl game on January 4 at Texas Christian University’s Amon G. Carter Stadium.

The Tulane Green Wave (7-6, 3-5 American Athletic) defeated the Southern Mississippi Golden Eagles (7-6, 5-3 Conference USA) 30-13 in the 17th annual bowl. This game was the first appearance in the Lockheed Martin Armed Forces Bowl for both teams and the first time the two football teams have competed against each other in a decade. 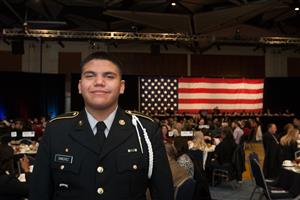 The following Joint Services Color Guard members wree among those expected to represent FWISD in the festivities:

View photos from the luncheon here.

A 30-second Fort Worth ISD commercial aired on the big screen at Amon G. Carter Stadium during the game that featured retired 1st Sgt. Campbell.

The commercial has a recruitment theme – for teachers, cafeteria workers, bus drivers, and custodial staff – all needed at Fort Worth ISD.