It Takes A Village

Ivery Williams had no idea what awaited him on the other side of the front door at the Leadership Academy at Como Elementary School on the afternoon of Wednesday, May 27. 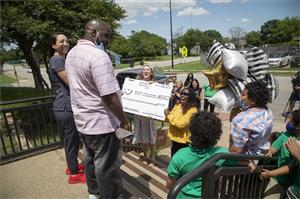 He had agreed to help school nurse Chelsea Brandewie move heavy boxes from her vehicle. As they made their way to the front of the school, the door swung open, and the father of six saw five of his children, school staff and friends with black, white and gold balloons, cheering him on.

“Thank y’all so very much. This is God sent,” Mr. Williams told the crowd. “Who would have ever thought?”

The surprise left him speechless.

'Our school is truly a family'

In March, four of his children were in a serious accident with their mother that left some temporarily in wheelchairs and on crutches. Following the accident, Mr. Williams took on full responsibility caring for his six children. Five of them attend the Leadership Academy at Como Elementary, and a sixth is a student at Monnig Middle School. Things became rough for the single parent, according to a recent Fort Worth Star-Telegram story. Mr. Williams lost his job and his car.

Ms. Brandewie recalls seeing Mr. Williams waiting across the street from the Leadership Academy at Como Elementary for the Trinity Metro bus. At the time, three of his children were in wheelchairs and one was on crutches. 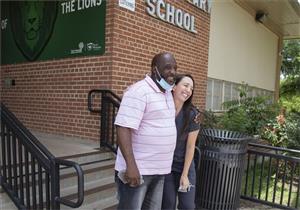 “It was the most heartbreaking scene seeing them wait at that bus stop day after day,” Ms. Brandewie said. “I saw the struggle.”

She would soon ask Mr. Williams, who would walk or ride the Trinity Metro bus to transport his children, about what happened to his car. He shared his story with her, and Ms. Brandewie couldn’t turn away.

“I was like I have to help him. I have to do something,” she said. “He has stepped up like I’ve never seen before for these kids. His love is so evident that I just I respect it so, so much.

“Seeing someone … struggle but have such good intentions on taking care of his children, you just don’t have a choice. You have to step up and help… you rally around them to give them hope and show them they’re not alone but also just further the point that our school is truly a family.”

With Mr. Williams’ permission, Ms. Brandewie started a GoFundMe page to help the family, hoping it would raise a few hundred dollars. On the page she explained the family’s struggles and how Mr. Williams, despite the challenges, had taken it all in stride and kept a positive attitude.

What occurred next was unexpected.

More than two weeks after launching the fundraiser, Mr. Williams’ children, school staff, his pastor and friends stood on the school steps cheering him on and holding a hand-made check. In just a couple of weeks, the fundraiser collected more than $24,000. And there was more good news to come.

Unbeknownst to his children and behind the cheering well-wishers, a 2020 red Dodge Grand Caravan was parked in front of the school, ready for Mr. Williams to take the wheel. It was donated to him from local dealer, SouthWest Chrysler Dodge Jeep Ram. 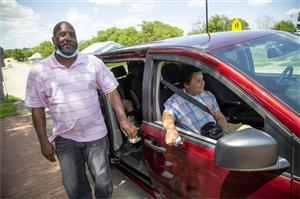 “God worked all through this. God has his angels circled all around me, and that’s this school.”

Nearly speechless, Mr. Williams said the outpouring of generosity gives him “a sigh of relief.” He said that he intends to put the monetary donation toward his rent, other necessities and paying it forward.

View photos of the surprise here and hear more of Mr. Williams' story in this recent WFAA story.

As the children made a beeline for their new vehicle, Mr. Williams thanked all who had gathered. One of his children who hardly smiles, smiled more than ever that day.

“Just hearing and seeing their smiles made it all worth it, 100%,” Ms. Brandewie said.