Gathering around a television for a recent episode of The Kelly Clarkson Show, students at Fort Worth ISD’s Leadership Academy at Mitchell Boulevard had a little fun. In a game of “Where’s Ms. Woods?” students looked for their school librarian, Regina Woods, on a May 18 show.

“There she is! She’s right there! She’s on the back row,” students called out. “See that blue shirt. That’s her!”

Looking on, Ms. Woods' face grew wide with a big smile as students shouted, pointed and chuckled every time she appeared in screen. 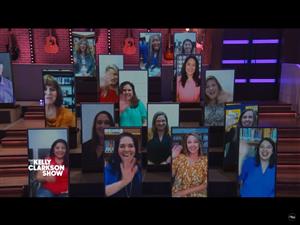 Ms. Woods was among more than 20 Texas school librarians invited to sit in The Kelly Clarkson Show virtual audience for a surprise announcement from former U.S. first lady Laura Bush. The librarians, who were recently awarded with the 2021 Laura Bush Foundation for America’s Libraries grant, were surprised with news that they would receive additional funding and books from H-E-B and Scholastic for their campus libraries.

“I couldn’t believe completing a grant application led to all of this,” Ms. Woods said.

The surprise announcement from Mrs. Bush was part of Kelly Clarkson’s Best In Class 2021 segment taped in early May. It aired nationwide on Tuesday, May 18, 2021. Joining Ms. Woods in the virtual audience was M.L. Phillips Elementary School librarian Emily Ryan, who was also surprised with the award. View the segment here.

The grant includes more than $11,000 in money and books from the foundation, H-E-B and Scholastic to extend, update and diversify the library collection at Mitchell Boulevard.

“She is very deserving of this as she works tirelessly to see that her library shelves are filled with books for her kids, day in, and day out,” the Leadership Academy at Mitchell Boulevard Principal Danny Fracassi wrote in a recent email message to Inside FWISD about Ms. Woods.

This year, the Laura Bush Foundation for America’s Libraries received more than 2,000 grant applications and awarded more than $ 1 million in grants to 200 schools across 43 states.

“There are many students who don’t have books at home, so having access to a library at school is essential,” Mrs. Bush said in a recent statement issued by the George W. Bush Presidential Center. “With the grants, school libraries across the nation can restock and update their collections providing opportunities for students for years to come.” 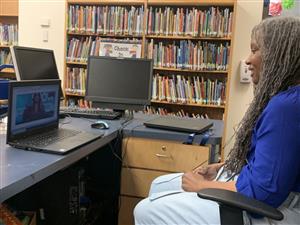 The opportunity to diversify the library collection at Mitchell Boulevard is what attracted Ms. Woods’ about the grant, she said. The COVID-19 pandemic left the school’s library shelves nearly empty, she said, and the titles that remained were mostly outdated.

“If I got the grant, I could purchase books that had characters that look like our scholars, live in neighborhoods they live in, and live lives that were similar to theirs,” Ms. Woods said she thought. “I uploaded the application just in time to meet the January deadline.”

This is Ms. Woods’ fourth year as a school librarian. Her educational career spans 42 years, approximately 35 years of which have been with the Fort Worth ISD as an elementary school educator and instructional coach. Previously, she also wrote third and fourth grade curriculum for the District. 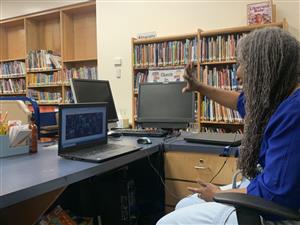