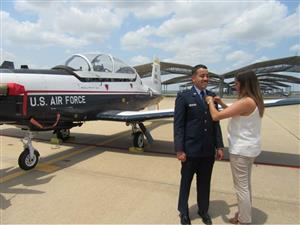 The 2014 WHHS alum graduated from the U.S. Air Force Pilot Training at Vance Air Force Base in Enid, Oklahoma on Friday, July 16, fulfilling a childhood dream. 1st Lt. Hinojosa started Specialized Undergraduate Pilot Training (SUPT) at Vance Air Force Base in late 2020. On July 16, 2021, his mother pinned his wings on him in front of the T-6 Texan II, an aircraft in which he logged more than 115 hours of flight instruction.

“[1st Lt. Hinojosa] goes on now as a fully rated USAF pilot to advanced flight training and assignment to the operational aircraft he will fly in our defense as the greatest nation in the world,” Col. Malesky said.

Upon graduating from Western Hills, 1st Lt. Hinojosa spent one year at the New Mexico Military Institute. He was appointed to the U.S. Air Force Academy and graduated in 2019. As a WHHS student, 1st Lt. Hinojosa served as Group Commander in the campus Air Force JROTC and participated in Aviation Honors Ground School. 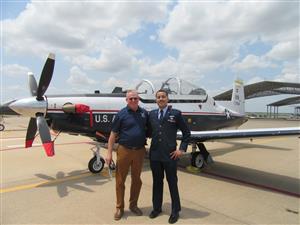