Congratulations to Fort Worth ISD fifth-grader Alondra Villa, whose design is being turned into a die-cast model car that will be available at major retail stores nationwide.

The Diamond Hill Elementary student is the winner of the third- to sixth-grade division in a contest sponsored by Lionel Racing, the official die cast of NASCAR.  Students from elementary schools participating in Texas Motor Speedway’s Speeding to Read program submitted designs of their fantasy stock car and wrote an essay explaining the inspiration behind their design. Winners were selected in two divisions – kindergarten to second-grade and third to sixth-grade. 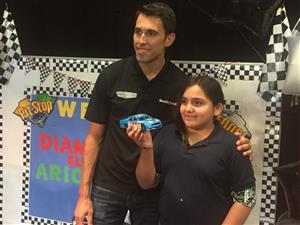 On Thursday, April 5, Alondra was presented a die-cast model car of her very own, red, white, blue and yellow design. She was treated to a surprise visit from race car driver Aric Almirola, presented with four tickets to this weekend’s O’Reilly Auto Parts 500 Monster Energy NASCAR Cup Series at Texas Motor Speedway and other promotional items. Almirola currently drives in the Monster Energy NASCAR Cup series.

Students lined the halls for a parade welcoming their special guest to the campus. They held race flags and posters. The school hosted a celebratory pep assembly in the cafetorium that coincided with an assembly for the upcoming STAAR test.

According to a recent Texas Motor Speedway media release, designs were judged on “originality, incorporating reading and/ or school elements into the design … an orderly appearance that can be transferred to an authentic die-cast, and the essay behind the theme.” The winning designs will be added to Lionel Racing’s NASCAR Authentic line and available for purchase at retailers like Walmart and Target.  Every student and faculty member at Diamond Hill Elementary School will receive a die-cast car with Alondra’s design at a later date.

In her contest essay, Alondra wrote about her love for reading and how her design was inspired by her teenage brother who loves cars. Her winning design is a blue race car with red and yellow flames, a peace sign, the number 18 draped in the American flag and the Diamond Hill Elementary mascot, an eagle.

View photos from the rally here.