It is with great sadness that the Fort Worth ISD Board of Education and the District must share the news that Second Vice-President and District 4 Trustee Daphne Brookins has passed away, following a brief illness.  Her colleagues are remembering her passion for student success, her commitment to the greater community, and her insightful vision for the Fort Worth ISD.

Ms. Brookins, who was first elected in 2019, was a young adult motivational speaker and writer and had most recently served as an adjunct instructor at Texas Wesleyan University. She also was a member of multiple local and state boards, including the One Star Foundation, to which she was appointed by Gov. Greg Abbott. She earned her bachelor’s degree from Texas Wesleyan University.

“Words cannot express our devastation and sadness at this news,” said Board President Tobi Jackson.  “Ms. Brookins was a champion for kids and a much-valued colleague who embraced her board work with collegiality and dedication. More than that, she was a dear friend whose smile illuminated any room she was in.  Our thoughts are with her family right now, especially her sons.

“We are deeply saddened by Ms. Brookins’ passing,” said Superintendent Kent P. Scribner. “She was always focused on students and never allowed any opportunity to further their needs to be lost. She always wanted to ensure that families received resources that allowed stability and a good education for their children.”

“It’s an honor,” she said at the time of her election.  “I’m proud of the trust that the citizens of District 4 have placed in me to bring my years of experience in education, social services and partnerships to the table to help District 4 and FWISD.”

Ms. Brookins had previously served as a council member and, later, mayor pro tem for the City of Forest Hill.  She was also an early supporter and board member for the District’s Young Women’s Leadership Academy.

As a FWISD board member, Ms. Brookins’ particular focus was to advance opportunities for young women.  She also wanted to ensure that all daycare facilities in Fort Worth were on the same page as the District’s early learning program.  She particularly championed early childhood issues, and the care and nurturing of our very youngest children, birth to three-years of age.

Ms. Brookins’ many affiliations and leadership roles, past and present, included YMCA Metropolitan Board, Director’s Circle with Girls Inc., Tarrant County Challenge Inc. Board Member, Advisory Board Member for Expanding Your Horizon, Tarrant County CHIP Coalition co-chairperson for the Marketing Task Force, and the Ladder Alliance Board Member. 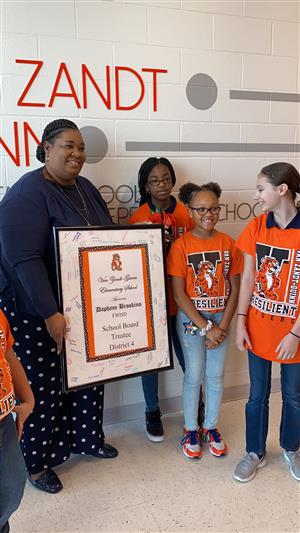 As a collegiate athlete, Ms. Brookins was an All-American shot-putter and discus thrower and held many records that stood the test of time and have only recently been broken.

Ms. Brookins was particularly gratified last year when her late husband, Carl Brookins, was honored with the establishment of a scholarship in his name. District leaders and fellow trustees contributed to the scholarship, which was awarded for the first time this spring and will be annually given to Fort Worth ISD graduating seniors, rotating in turn to each high school.

The schools Ms. Brookins represented in District 4 include:

Funeral arrangements have not yet been announced.