For the third year in a row, Kylee Williams, a sixth grader at Daggett Montessori, claimed the Science-Minded Artist award with her project “Looks Can Be Deceiving,” a window cover to deter intruders in the event of an active shooter situation. The window cover gives the impression that a classroom is empty.

Westpark Elementary fifth grader Rylee Fusilier’s project “Volleyball ‘In’ Light,” which creates an illuminated foul line that informs a referee when a ball is still in bounds, earned the Art-Minded Scientist award. 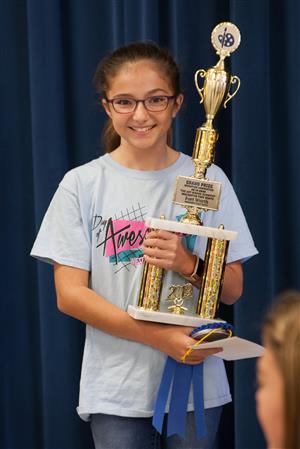 Invention Convention recognizes the District’s youngest innovators and encourages students in kindergarten through seventh grade to produce creative art and science inventions to improve the world. The competition is hosted by the District’s Choice Programming and Enrichment division in collaboration with Imagination Fort Worth.

Projects focus on inventive thinking, creativity and applying critical thinking skills and also encourage students strive to for knowledge and achievement in the arts and sciences, according to convention organizers.

In addition to the two grand prizes, individual and class project winners were recognized at a reception and awards ceremony, Saturday, December 7 at Western Hills Elementary.

The following are the 2019 Invention Convention individual award winners: